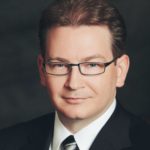 I had the opportunity to watch the NYC LeSS Meetup with Craig Larman via video. I attended one of these when Craig was in California, and have attended two CLP training sessions with him, so I have some idea about his message. It’s always useful to hear the news again if for no other reason than to overwrite some of the general nonsense one hears so often in the hallways of the average corporation or on the average Slack channel. Fresh air is good for the soul.
For those who haven’t heard Craig speak, or attend one of his training sessions, the best way I can describe him is that he’s the honey badger of change consultants, he just doesn’t give a, well you catch my drift. There aren’t a lot of weasel words or marketing fluff. Just the simple facts as he sees them. These facts, a description of reality really, can be challenging to hear at times. It’s why you often hear folks giggling uncomfortably in these sessions when Craig says something stark. The thing everyone should understand is, he’s not joking. So pay attention.
Although these sessions only run an hour or so, there is enough content to fill a book, literally. The concepts go deep, and the skills and tactics mentioned in a few sentences can take years to master and fully understand (things like systems modeling, for example). Here are just a few items that stood out to me during this particular session. 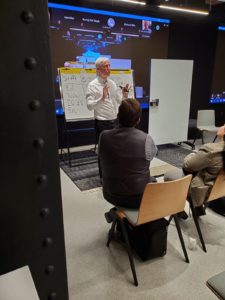 A difficult thing to understand for many is that behavior at small scale is almost meaningless at large scale. Everyone wants to think they can improve their process, or get a little better at their job (or, hope that the other guy gets better at his). Larman makes the point that at scale, it’s the structure that drives change. The root cause of the problems many large enterprises encounter are the result of their design not how good the developer sitting in a cube on the 42nd floor is. Deming taught us this long ago; the workers are not the problem; the problem is at the top.
I like to think of this scale issue from the standpoint of process improvement. In process improvements focused on cycle time, improving the performance of individual processes is unlikely to improve end to end cycle time much if at all. Just messing with the procedures is just as likely to elongate the cycle time as it is to reduce it. The queues and delays between are the story. It’s the structure of the process that must change, not the pieces. Same for organizations. This is a very difficult message for folks to hear if they are not in the mahogany lined offices on the top floor. You can improve locally, and that is all well and good, and I’d advise it, because moving forward is the only way to survive, but it won’t solve your organization’s problems.

The market for deep change 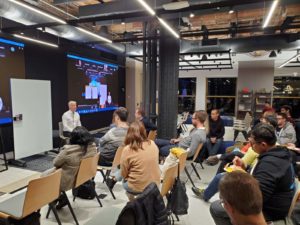 Craig makes the point that the worldwide market for deep change, meaning those companies that really want to change at a fundamental level, is small, perhaps 500 companies total.
I’m not sure how many companies there are but I found online that the total listed companies across all stock exchanges is around 45,000. This is wrong, no doubt. It excludes private companies (some of which can be very large even in countries with deep financial markets where listed would be advantageous), and many of those 45,000 companies are likely rather small. But given that number, we’re looking at one percent of listed companies as being open to real, fundamental, change. That’s a sad state of affairs, but there are deep-seated reasons that there is so little appetite for change at the power center of companies.
Without a profound sense of urgency deep change doesn’t happen. Until leaders are backed against the wall with a real crisis, they are loath to upset the very system that has provided so much. Most large organizations are elegantly designed to provide a steady stream of only what the boss wants to hear. Everyone down the chain of command is in on the game as well, so they want to play by the rules as well. Any information that is raw, real, and innovative is squeezed of real value before it ever gets to the board room. This all feeds very nicely into the strong confirmation bias we all have. It’s very near a closed-loop system in many organizations I’d wager, recycling the same excuses over and over again.

Problems are provoked with fake change

Fake change are those change efforts where the senior leaders are unwilling to fundamentally change the organization, even if they say they are. Instituting change in this environment can provoke existing power structures. When problems inevitably are uncovered, there isn’t the courage to tackle the root cause. There isn’t the courage because that wasn’t the point. The most significant sign that the organization isn’t ready for real change is the avoidance of making the fundamental structural changes necessary. There will often be reasons to retain the old structure or relabel them. If that’s the case, it’s just a show. If you begin a change program in such an environment, you run the risk of awakening a dragon with no ability to slay it, at least organizationally. The problems initially articulated that provided the excuse for the change are not resolved and perhaps made worse by the change chaos. In some cases, it would be better to let the dragon sleep.

Perhaps 99% hopeless. But that means there is a chance! Larman makes a great point about the individual, however. A point I think too many people miss because it’s uncomfortable. If you are in management, or any other specialist function that isn’t directly related to building something customers are willing to pay for, plan your exit. Learn a skill, become valuable. So many people operating in large organizations are intently focused on moving up the hierarchy that they forget that the purpose, at least in theory, of hiring anyone for anything is the skills that person brings to the table. If you never gain marketable skills or let them atrophy after years in the corporate environment, you will find yourself a prisoner. A prisoner of the very same organization you complain about. 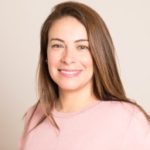 Definitely, participating in Craig Larman’s CLP training has fundamentally raised the bar for me, as a change agent, Scrum Master and Agile Coach. I managed to incorporate new concepts that will not only help me in my current situation, but will also be handy for many years to come. During this course we dont get into a deep dive of LeSS experiments (there are more than 600 of them and for that, there are 3 books that provide guidance, with examples and practical techniques in different chapters).  Instead, in this course we had a very unique 3-day experience with Craig, as he taught how to design your organization in a systemic way, thinking systemically, seeking to optimize the whole and not just locally. This course broke my mindset and perception and then put it back together again.  It opened up my mind, giving me more tools, and energy to keep changing things.

As Craig said in class: “to be an agent of change in an organization you need a lot of patience and big amount of sense of humor“.   It will not be easy, but for sure it will be worthy. Thanks again for amazing learning opportunity! 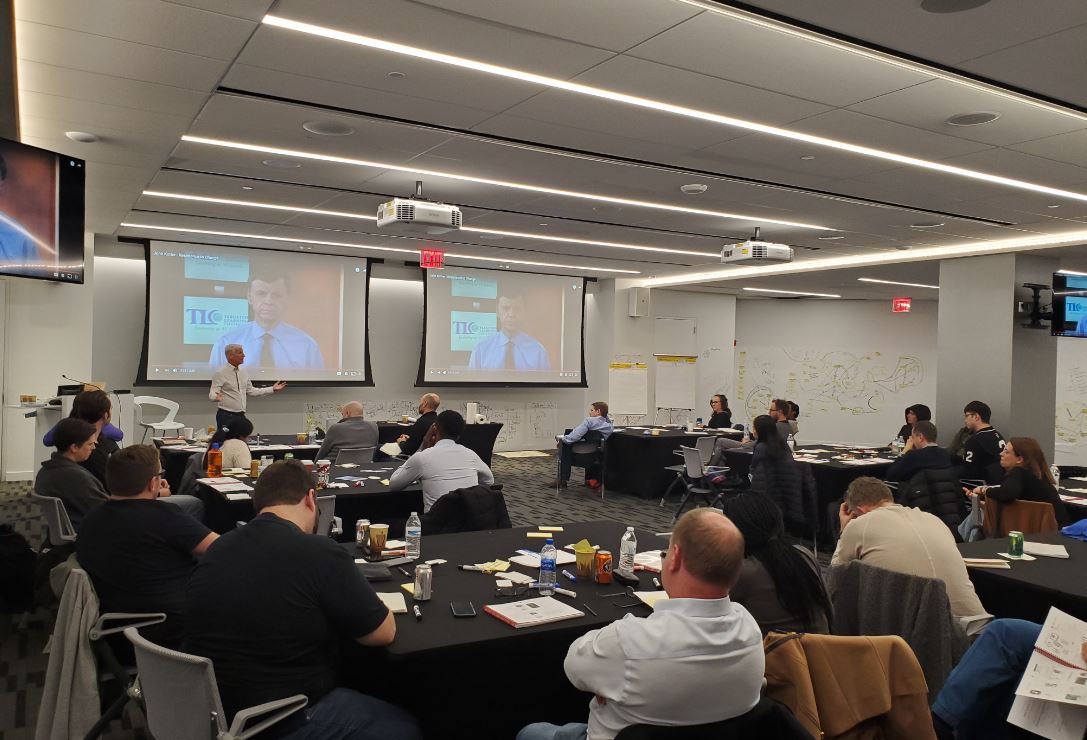 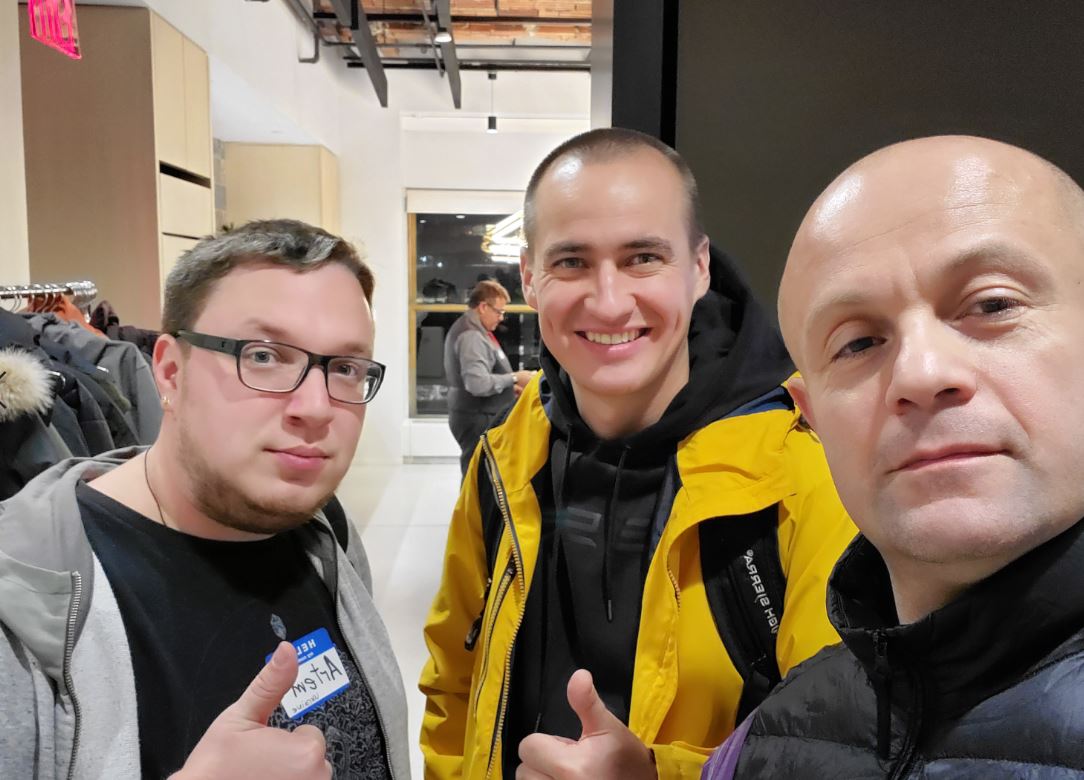 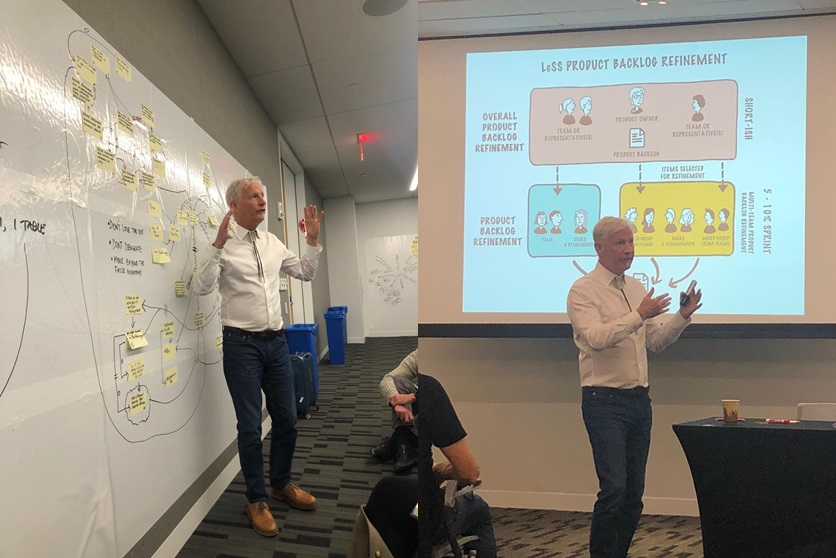 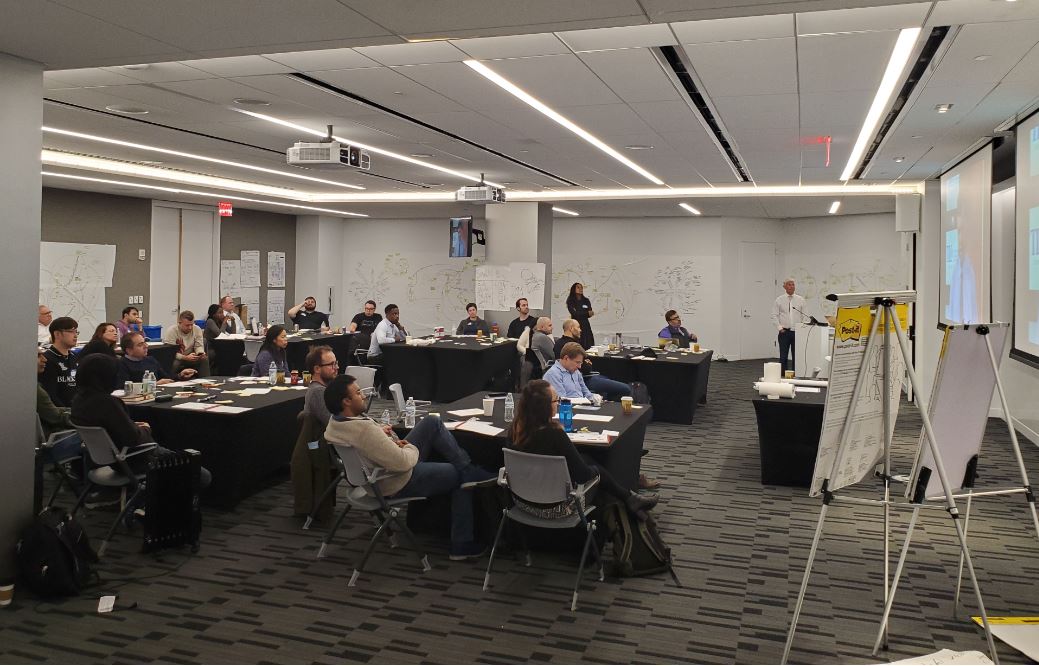 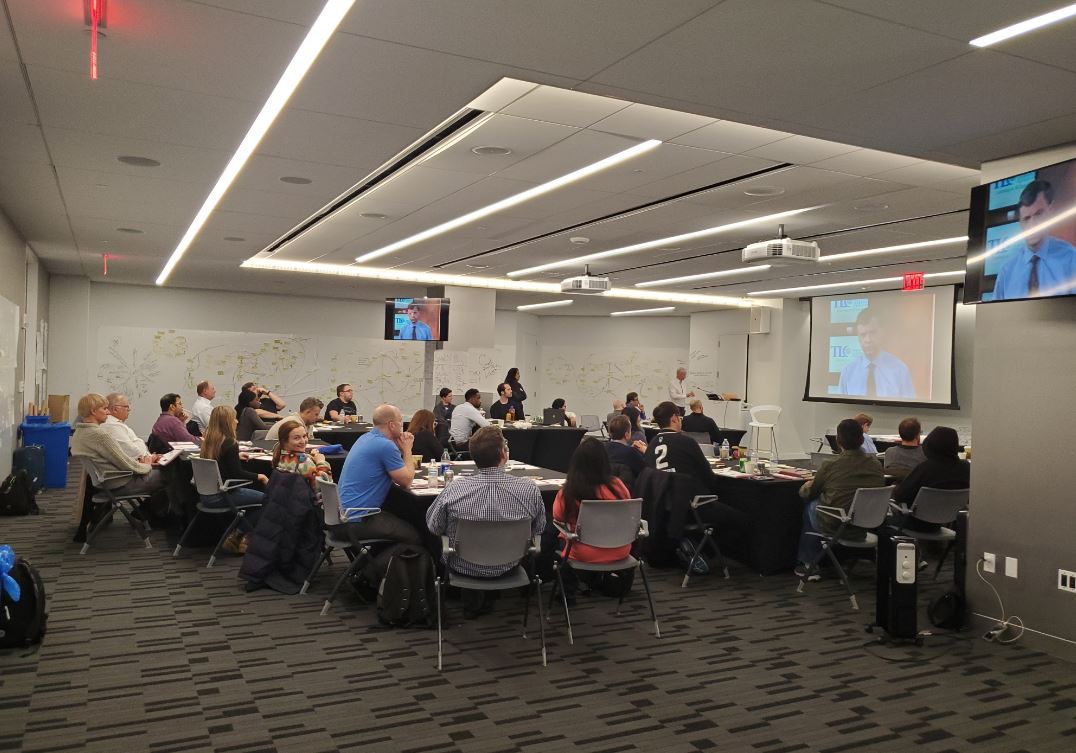 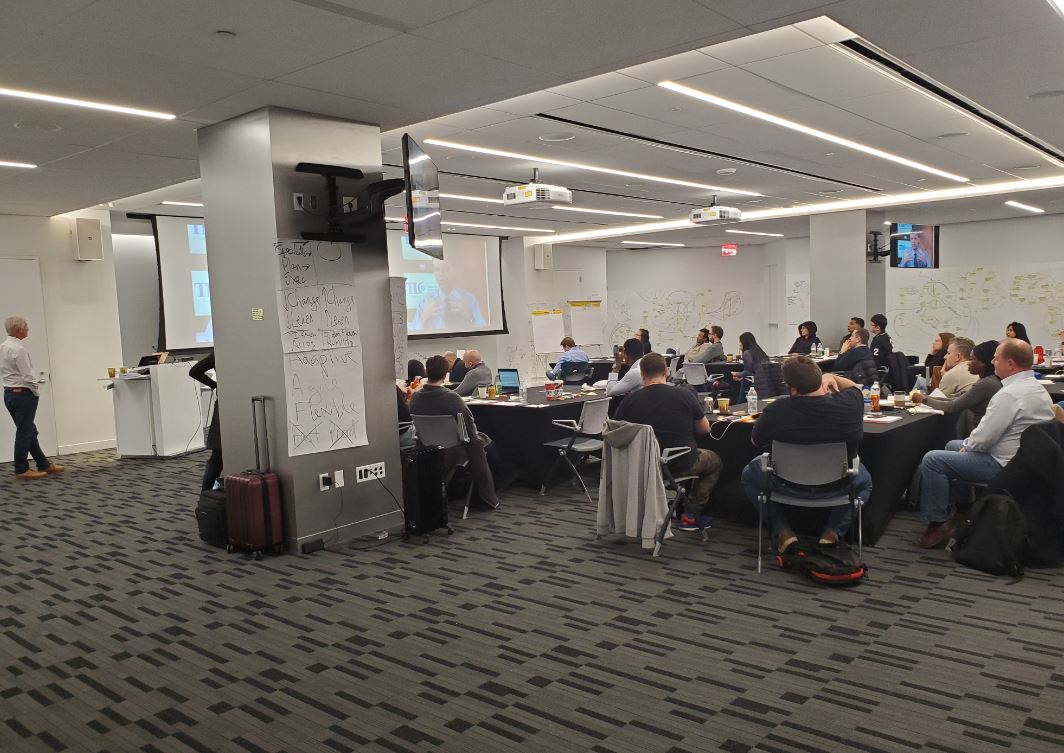 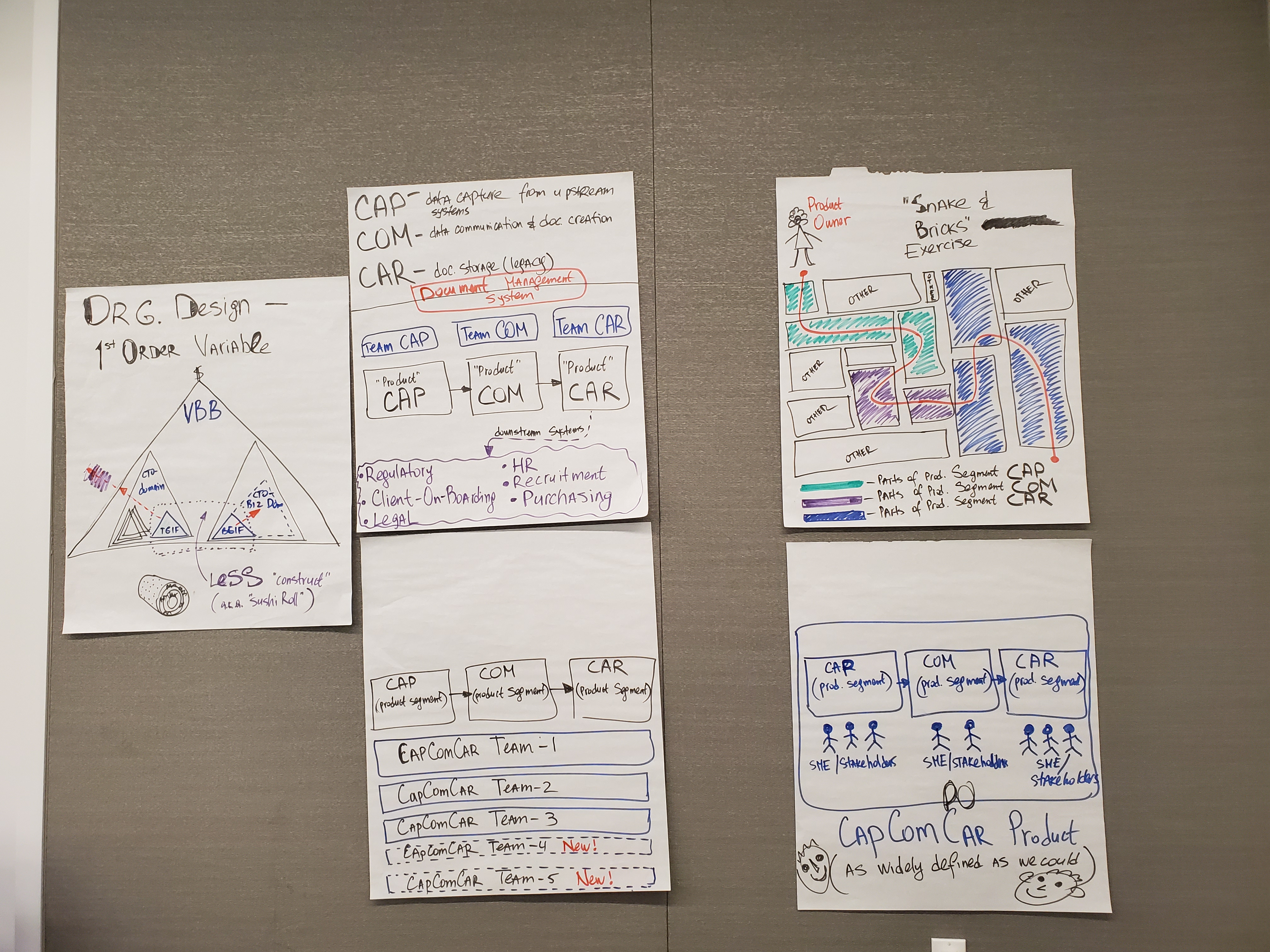