Lets kick off this post with the quote from another recent discussion that generated a number of strong comments from experienced professionals:

“…as long as companies remain complacent and reliant on outlived staffing/head-hunting approaches, cold-calling techniques, and ineffective HR-screening processes, performed by people that poorly understand the essence of an agile coaching profession, while trying to procure cheap “agile” resources (using “preferred vendor lists”) or treat seasoned professional coaches, as “requisitions to be filled”,  a coaching bar will remain low, and companies will be getting EXACTLY  what they have paid for: coaches-centaurs“

To summarize, the purpose of the above referenced discussion was to increase awareness about implications of ineffective coaches and coaching that exists in abundance today.  Here, lets look at some root causes why this problem exists.

Who Defines the role of Agile Coach?

For the most part, organizational understanding of a coaching role is weak.  Definitions of a coaching role that flow around, suggest that companies are still confused about what coaches do.  Definition of a coaching role is frequently lumped together with the role of a project manager, team lead, business analyst, Jira/Rally/VersionOne administrator etc. While some of these other roles, could represent potentially relevant past experience for a coach, lumping all of them together in one all-inclusive role description, delimiting them by a commas or forward slashes ?, is ironic, to say the least.  Many of these “ace pilot/submarine captain/NHL star” roles create a conflict of interest not just for people that step into them but for everyone else who gets affected by interaction.  Very often, inaccurate definition of a coaching role leads to inappropriate behaviors by a coach, such as attempts to seek authority and organizational power, exhibition of command & control behavior, competition with people being coached for ownership of deliverables, monetary incentives and other perks. 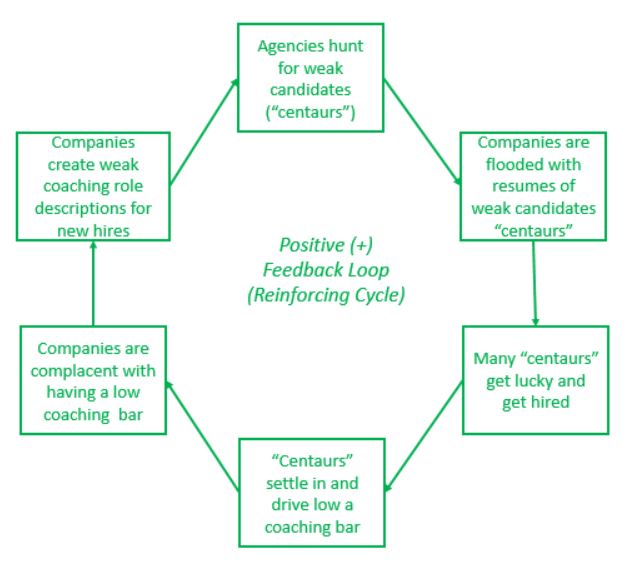 (Note: the above illustration excludes other system variables that may have effect on the variables and variables’ relationships shown above).

This vicious cycle usually leads to one inevitable result: over-time (usually months; sometimes a few years) companies realize that agile coaching did not bring about enough sustainable organizational improvements, as it was expected.  This further leads to two outcomes, both of which dependent of senior leadership vision and goals:

Who Really Makes Decisions and Why?

Rarely, senior executives take an active role in a coaching hiring process; exceptions exist but they are rare (usually,  exceptions are seen when things become very urgent – page 14).  But even when they [executives] do engage in the process, it is usually more the act of a formality, to ensure that a hired person “fits the culture”. Of course, and very ironically, one of the key expectations from an experienced coach should be to challenge an organizational structure (both, at enterprise and team level), and since culture is corollary to structure (Larman’s Law # 5), the latter would change (would be challenged) as well.  But this is not something that too many senior executives would like to hear.

For the most part, a hiring process is delegated to first- and sometimes second-line management, as well as internal agile champions that oversee and own agile transformations.  While Larman’s Law # 1, historically, has defined the attitude of middle management towards fundamental changes that challenge a status-quo, the recently added Law # 4 neatly describes “contribution” by some internal agile champions.  And while exceptions do exist, trends and statistics speak louder.

Let’s imagine the process by which an organization wanted to hire an agile coach (as employee or consultant – no difference):
In this process, the interviewers – are individuals described in Larman’s Law # 1 and # 4.   On the other hand, an interviewee, is a seasoned agile coach, with long enterprise- and team-level track record: she is a system thinker, dysfunctions challenger, a real organizational change agent.

Impact on a hiring process by Larman’s Law # 1-type Interviewers:

At an interview, a coach-candidate meets with first- and/or second-line managers that also expect that a coach will report into them, when she joins a company.  During a discussion, interviewers hear from a coach certain things that coaches usually bring up, uninhibitedly:

Unsurprisingly, the biggest question that many interviewers walk out with, after interviewing such a candidate is: “What will my role be like, if this coach is hired and brings about above mentioned organizational changes?”

Impact on a hiring process by Larman’s Law # 4 -type Interviewers:

Knowledge and experience of a coach-candidate supersedes that of internal agile champions and process owners.  Some of the discussions a coach elicits, and answers provides, by far exceed expectations (not to be confused with a term used in a performance appraisal process 🙁 !) of her interviewers.  Some suggestions and ideas shared by a candidate are a great food for thought for senior executives but not at a level, where Larman’s Law # 4-type coaches are authorized to operate.  Interviewers clearly see that a coach-candidate, if on-boarded, soon may become a more visible, influential contributor than the interviewers themselves.   A coach may also bring about some organizational turbulence that will take out of comfort zone some individuals that are resistant to changes.

What are the odds that this experienced coach-candidate will be given a “pass”? What are the odds that she will be even given a chance to speak to senior executives involved in a hiring process, to attempt to influence them,  to open their eyes, to offer a deeper system perspective on a situation, to make them think and talk about the forbidden?

And this is one of the ways, in which organizations that are complacent about agile improvements, shoot themselves in a foot: they very effectively disqualify qualified agile coaches and by doing so, reinforce the feedback loop illustrated above?.