In class, we were lucky to have a few people that were already highly experienced with Scrum and knew fundamentals of LeSS. A few people were also from the same XYZ company (name withheld for privacy) that specializes in global ERP solutions for manufacturers. Among XYZ company people, there was a senior vice president of R&D and a few other senior-ranked technology professionals.  With everyone’s consent and for everyone’s benefit, we were able to discuss the above topics in the context of XYZ case.

After the first round of exploration (v1.0 below), it became apparent that the product definition was too wide (big), and it would be impossible to support its development by a single LeSS product group (2-8 teams). 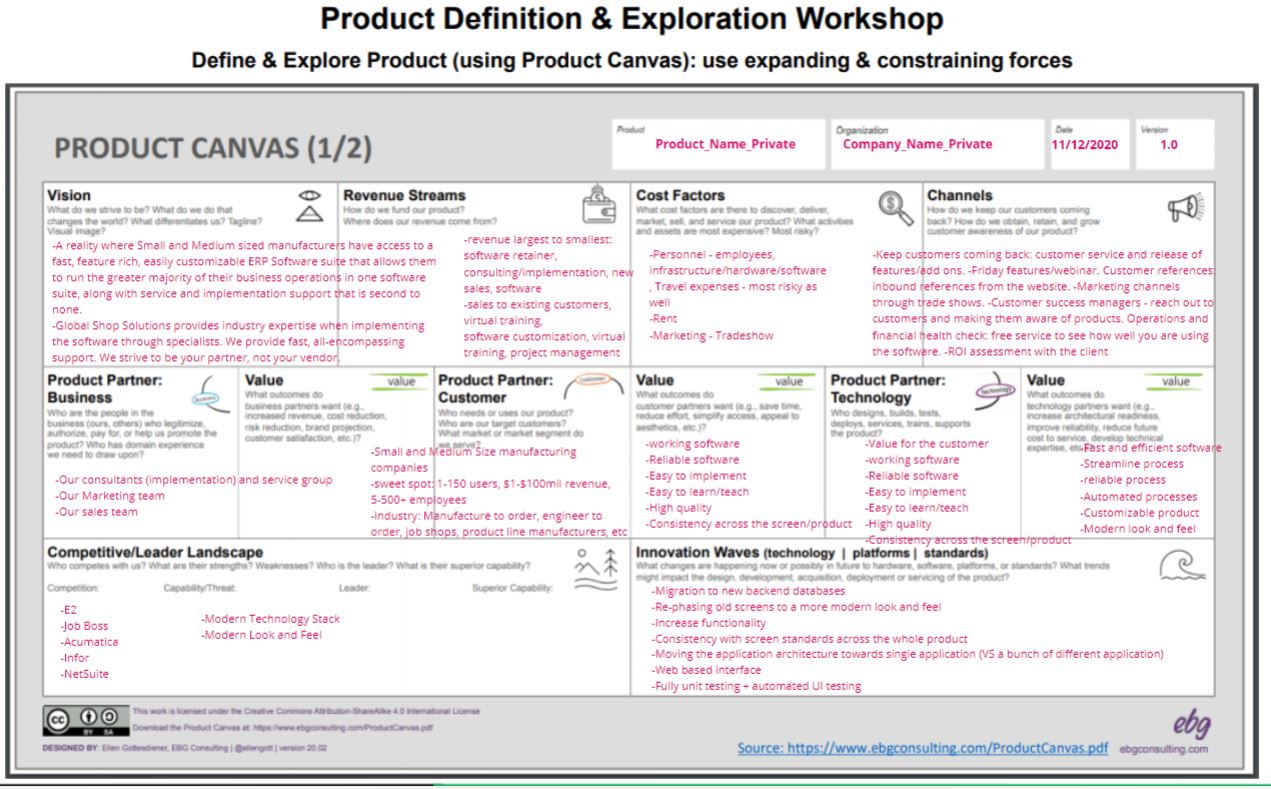 Of course, this assumption was not conclusive but for the purpose of this in-class exercise, it was decided to reduce the product definition, by focusing only on one particular area – Sales (v2.0 below).  This was consistent with what is recommended in LeSS: to expand product definition as reasonably possible, but not make it too wide to manage. 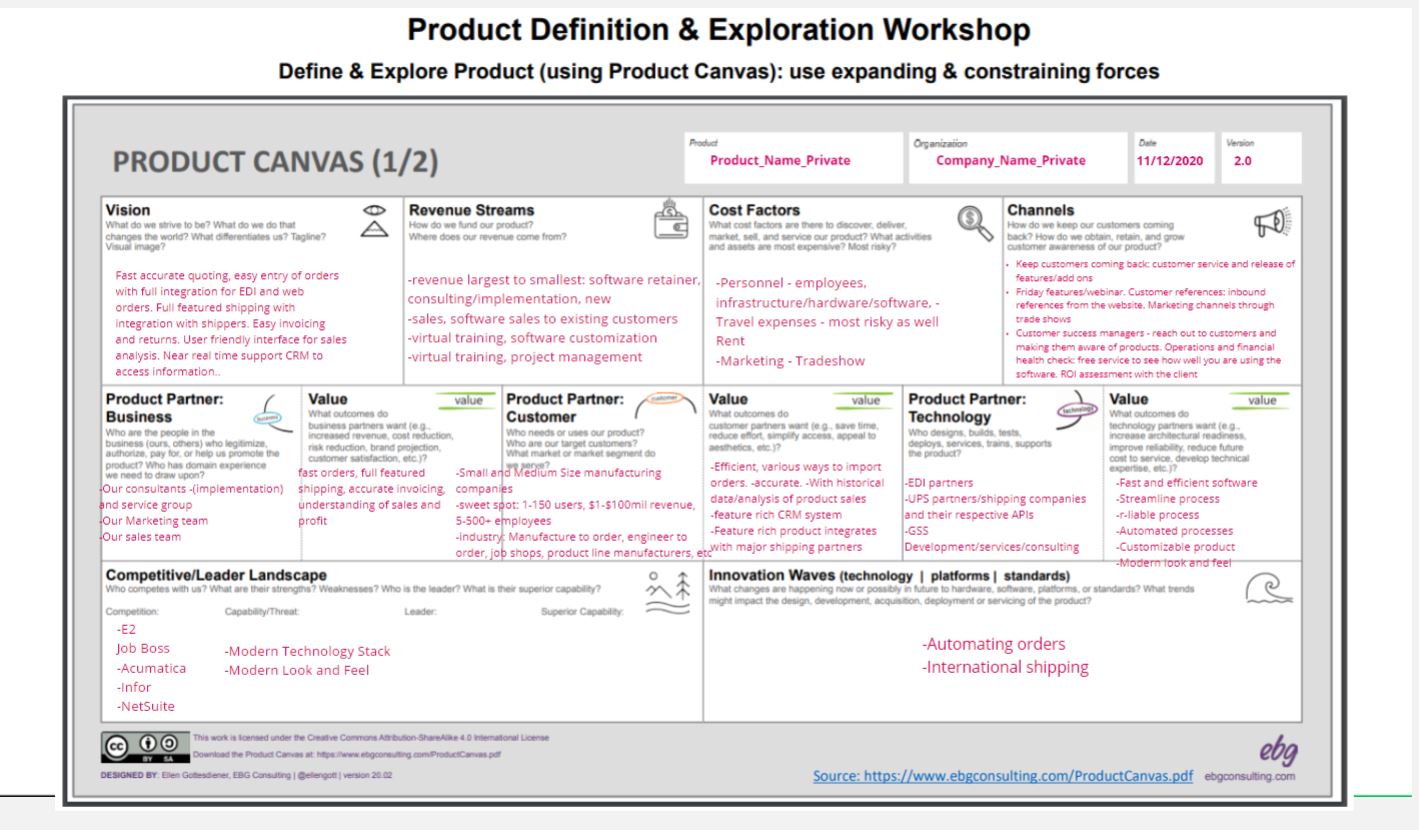 In the second phase of product definition, the class focused on identifying user types and actions, as well as various product components: interfaces, data, controls, environments, etc. This further helped validating the assumption, made in the first step of product definition. 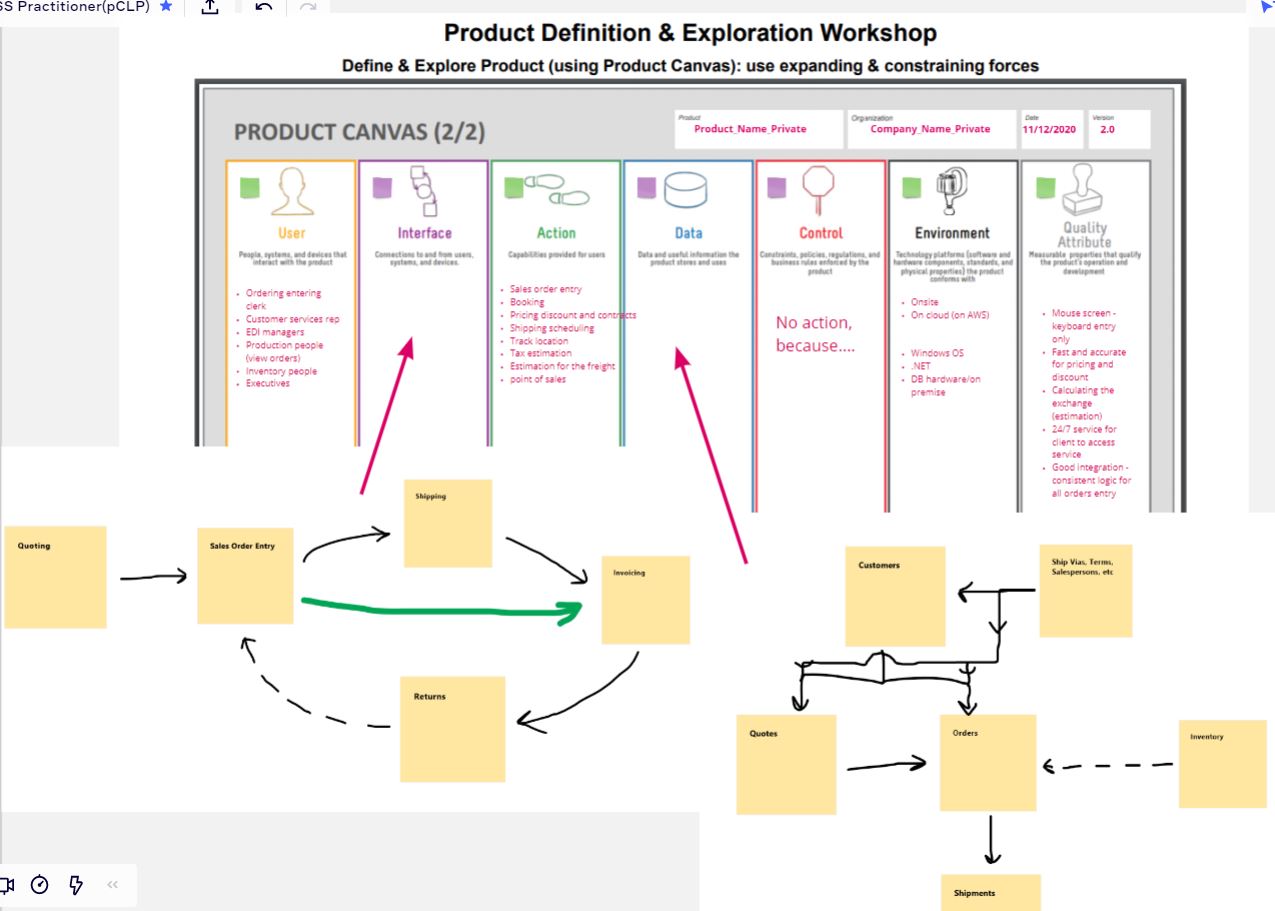 Following the product canvas use, to identify the most important (and big) product features, the class proceeded with a story mapping exercise. The following five large features have been identified: New Sales Order Interface, Shipping Dashboard, New Quote Interface, Data Layer. They were then further decomposed into smaller features that were prioritized, on a time scale.  The class had a quick conversation about what a minimal viable feature (MVF) could look like if multiple small features, from various buckets were deployed together (the curvy black line below).  Within a few rounds, many more small features were identified and bucketed under large features (but not prioritized). It was a shared understanding by everyone that all identified items, eventually, should end up in a backlog. 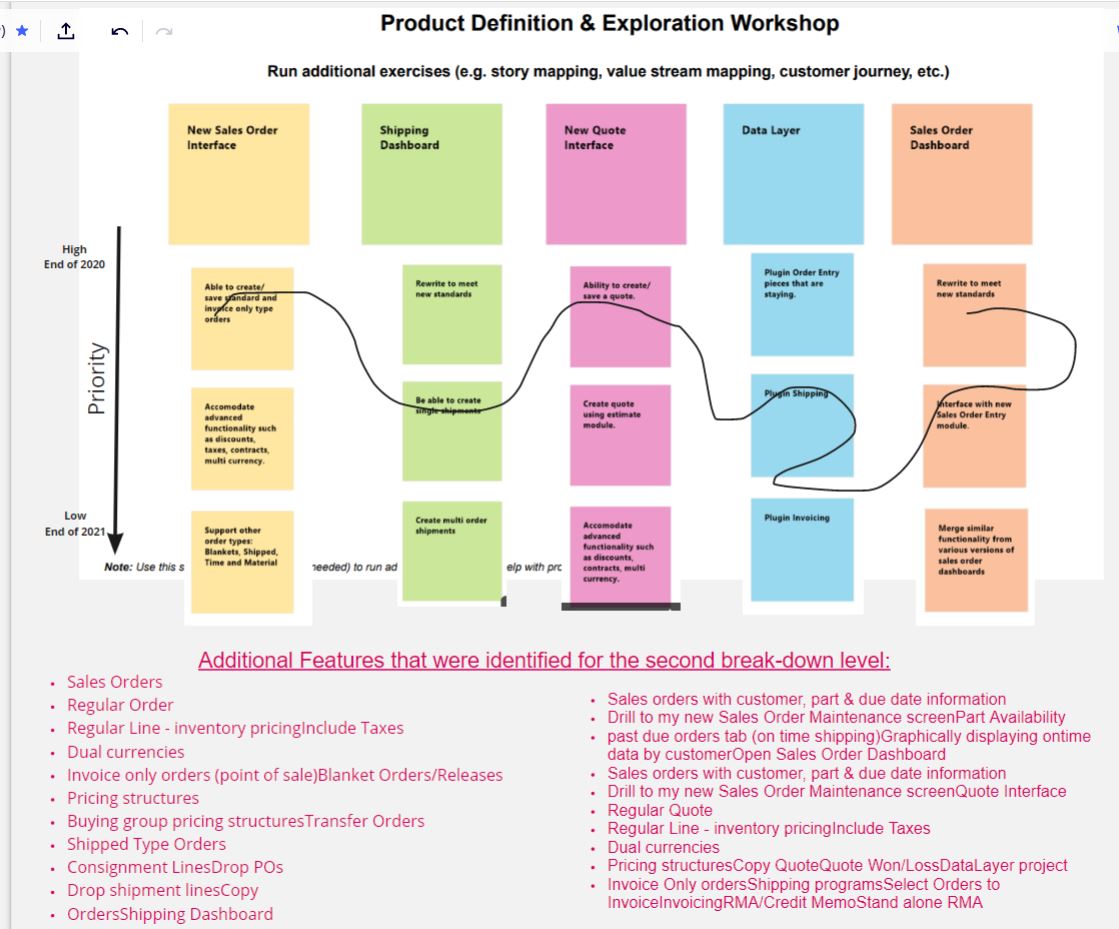 Next, the class tried to envision what Dominion of Done (DoD) could look like for a team that was tasked to deliver any of the above mentioned features. The attempt was made to identify those activities that would be still Undone (impossible to finish in a sprint) at the initial stage of sprinting and how important it would be to gradually expand DoD and shrink Undone, over time. The class further discussed differences between Unfinished work (usually, a team’s problem) and Undone work (usually, organizational problem).

Based on all of the information collected, the class tried to envision what technical skill set and functional domain expertise would be required, for each team, to ensure that each team could take any item from a backlog and get it to Done in one sprint. 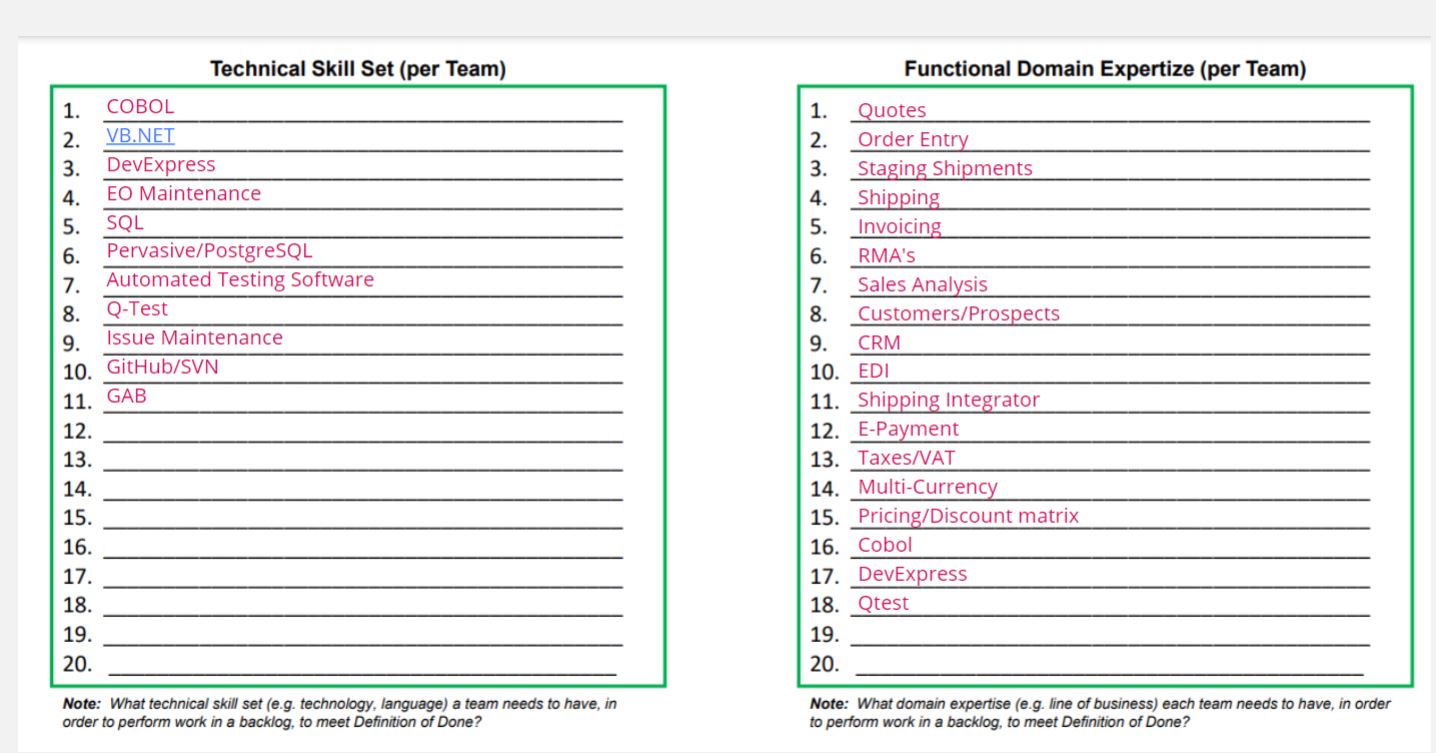 Finally, the class (this part was mainly driven by people from XYZ company) tried to hypothesize what a team structure could look like (team ‘blueprint’), given that some developers had one and some – more than one, skill set and domain expertise. Everyone understood that this is just a hypo and the intention is not to assign people to teams prematurily, since managers, leads or anyone else should NOT be making decisions on behalf of on teams. The idea of self-organizing team-building workshop was introduced and discussed (a few published LeSS case studies were reviewed to better understand this event). 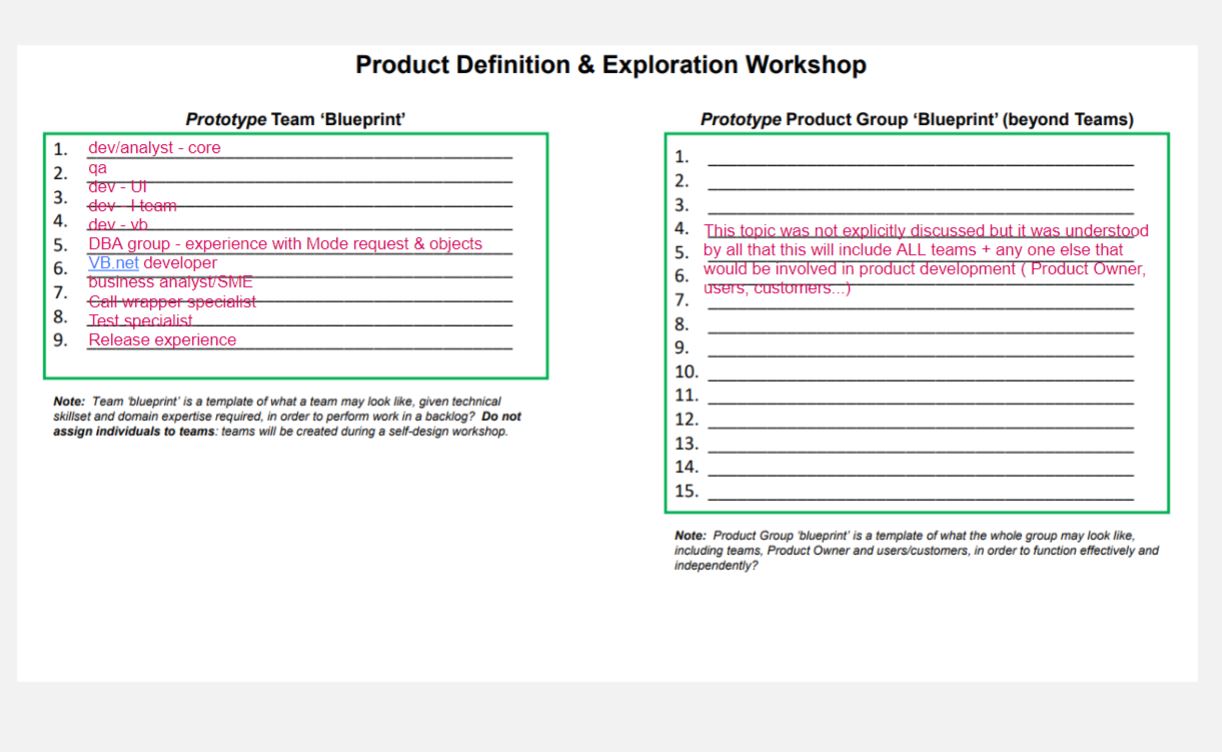 During the break, one of the class members (XYZ company) tried to blueprint what LeSS Product Group may look like if v1.0 model (illustrated above) was followed to describe the whole product.  It appeared that each Requirement Area, would have only between 2 and 3 teams. It was then discussed that this approach would  NOT be recommended, as very small requirement areas (with very few teams in each area area) would lead to organizational silos, compartmentalizing of work, scattered knowledge and local optimization.

At this point, the class ended the simulation exercise, with understanding that in real life this process could take from a few weeks, to a few months. It was understood by everyone that before an organization makes a ‘flip’ to LeSS, some additional, very important milestones would have to be achieved: 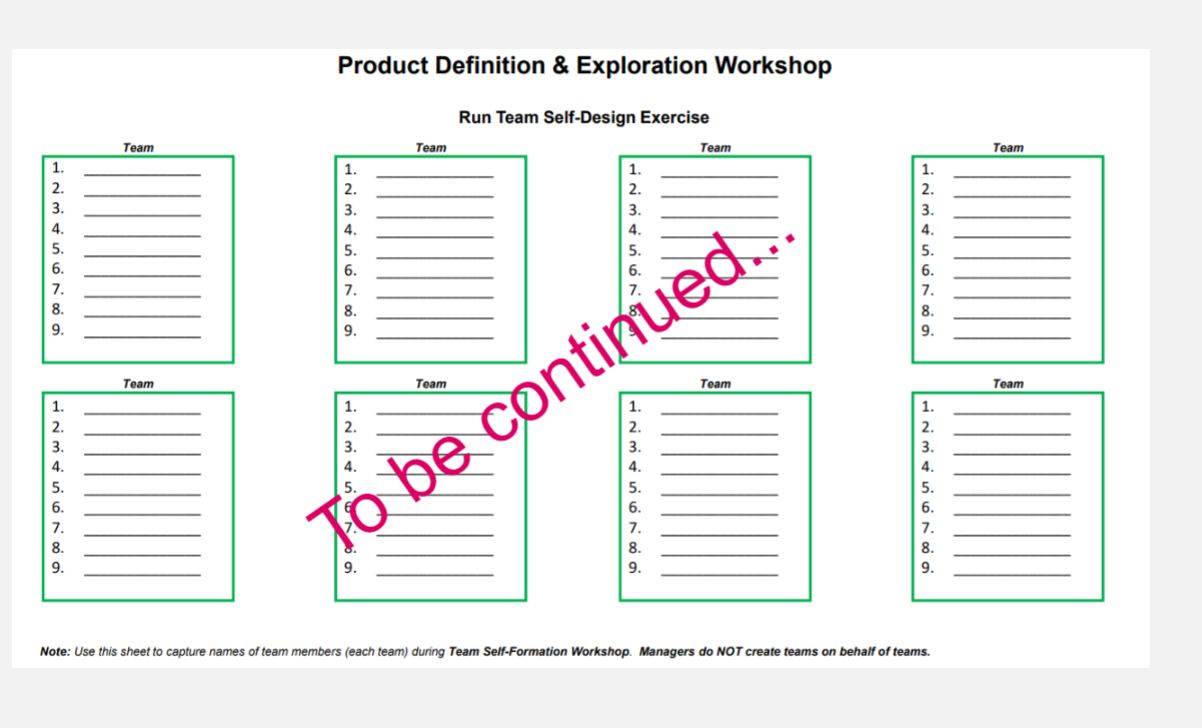 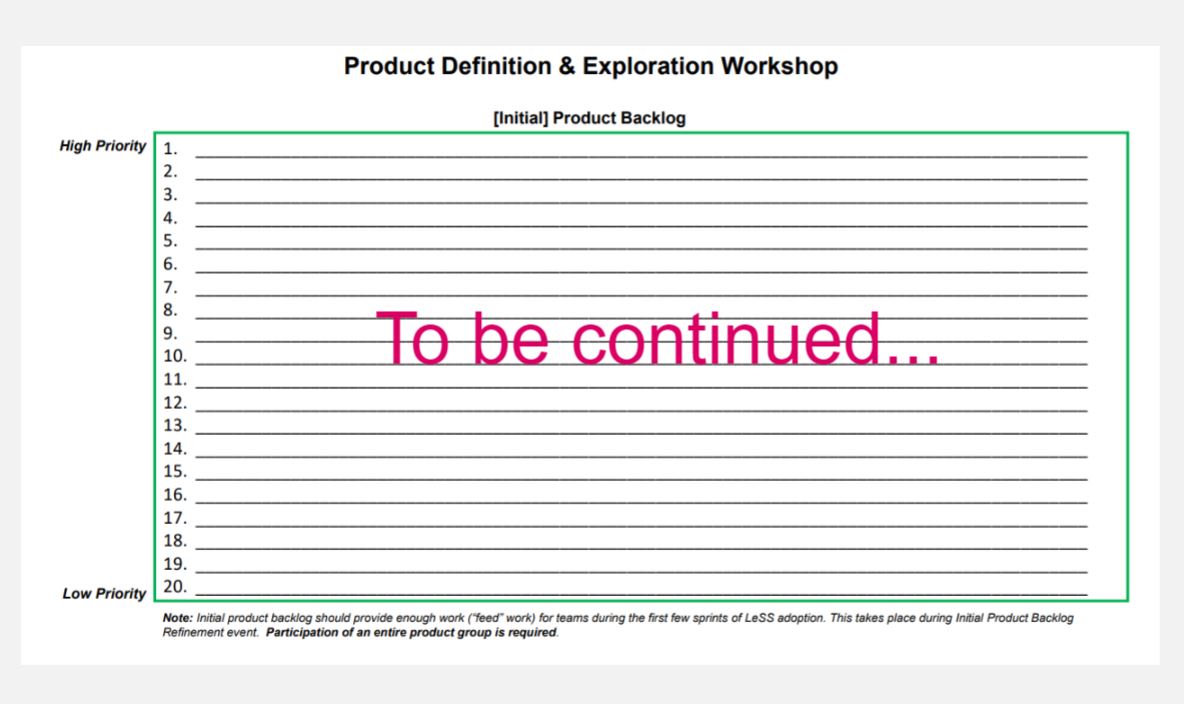 Preferably, a creation of an organizational impediment backlog – something, to be continuously attend to during Overall Retrospectives, where senior management, would take ownership of problems. 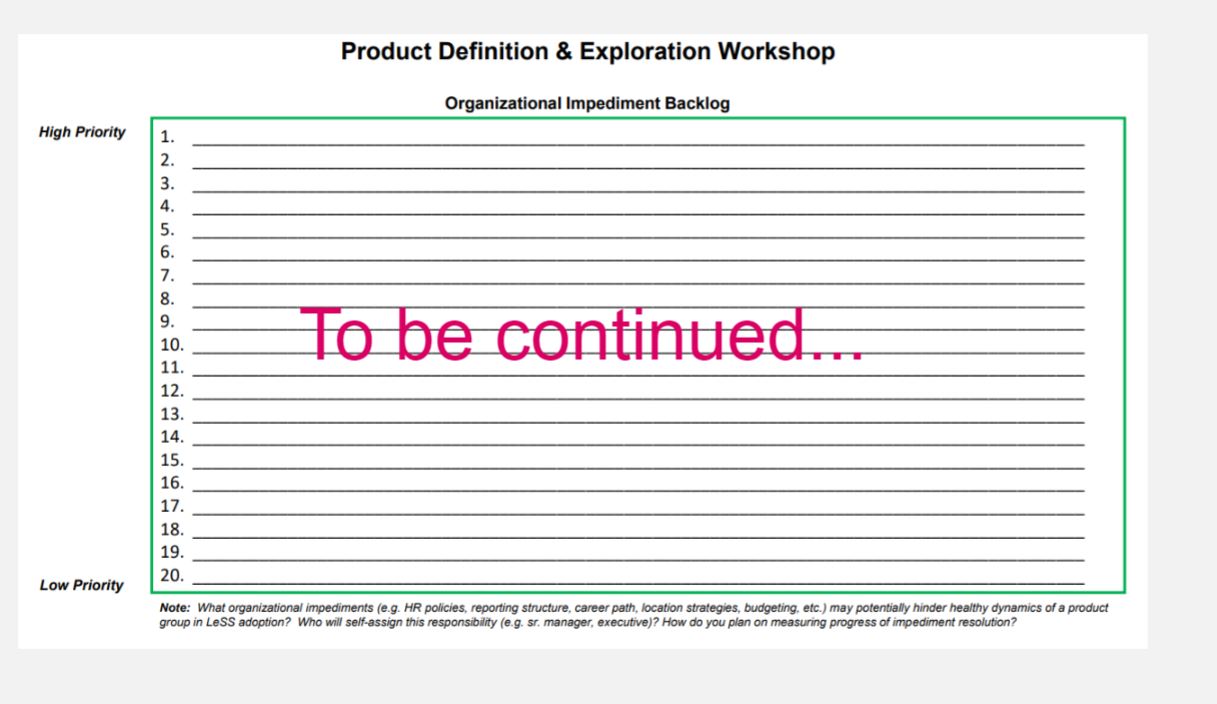 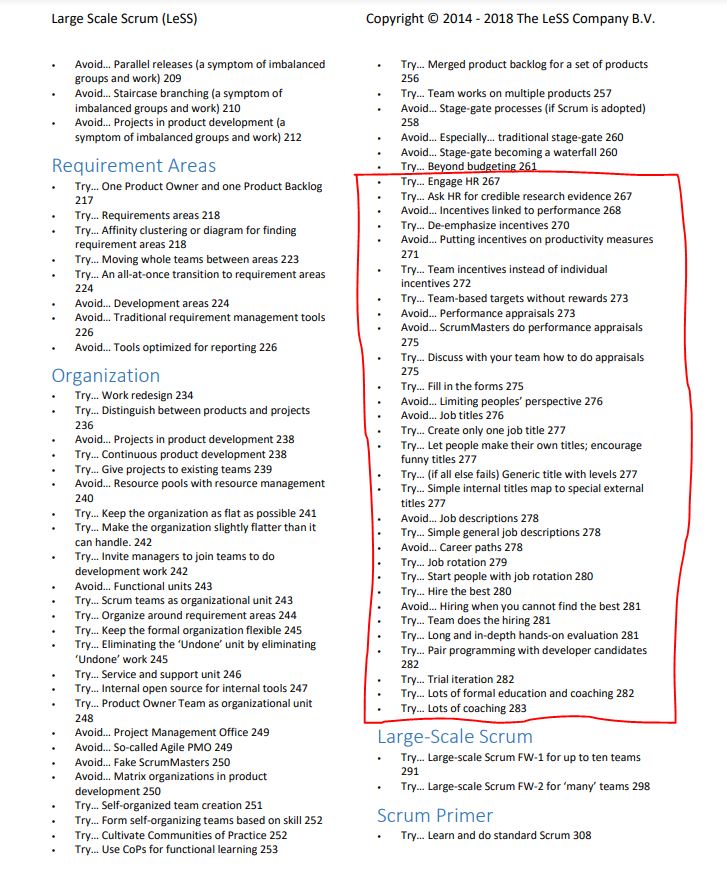 XYZ Company people have demonstrated a lot of determination to implement many aspects of LeSS learning and discoveries ASAP, in real work settings, within their organization.