Examples of Command & Control behavior can be historically traced back into centuries, to the periods of dictatorship, imperialism, monarchy, feudalism and even further back, to more primitive social systems.  However, for the sake of this discussion, let’s refer only as far back as Industrial Revolution of the last century.  Back then, workforce predominantly consisted of low-skilled laborers that performed routine, mundane physical work and managers-supervisors that were responsible for setting goals, assigning responsibilities, monitoring progress and praising-penalizing workers, based on individual performance of the latter (using “carrots & sticks” approach).  This type of management was a classic example of what is known as Taylorian Management (Frederick Taylor), according to which, there had to be clear delineation between individuals that performed work and individuals that controlled/managed work of others.  This type of human relationship in work settings was also later described as Theory X Management (Douglass McGregor), and it suggested that managers needed to use totalitarian and repressive style to ensure tight control over workers, because the latter would otherwise not work hard and efficiently enough.

Today, we still have many examples of Command & Control behavior that shape relationships among people in modern organizations.  This happens even in situations, where organizations have workers that are very highly skilled and intellectually advanced.  More frequently, this is seen in organizations that are at Laloux’s Orange state of maturity or lower.

While in part, modern Taylorian Behaviorism can be explained by long-lasting “cultural inheritance” that hopefully will wear off over time, it would be interesting to look closer at some specific root causes of modern-days Taylorian behavior.

Although not exclusively, the examples below, are more frequently observed between individuals that are related to each other by hierarchy (boss-subordinate).

Insecurity about own job. Worries about own career growth.

A manager does not feel secure about his own position.  This could be caused by company reorganization (e.g. merge, acquisition, flattening) and a manager feeling that his role may be reduced or eliminated.   This fear of becoming dispensable could be worsened by realization of personal incompetence and/or lack of professional knowledge.  This is frequently seen in situations, where managers, as they have progressed the hierarchical ladder, have given up their hands-on skills and became peoples’ managers.   One example of one’s own job insecurity is hands-off code ‘chief architect’ who wants to build his own power tower of control to ‘own’ enterprise architecture (see graphic below). 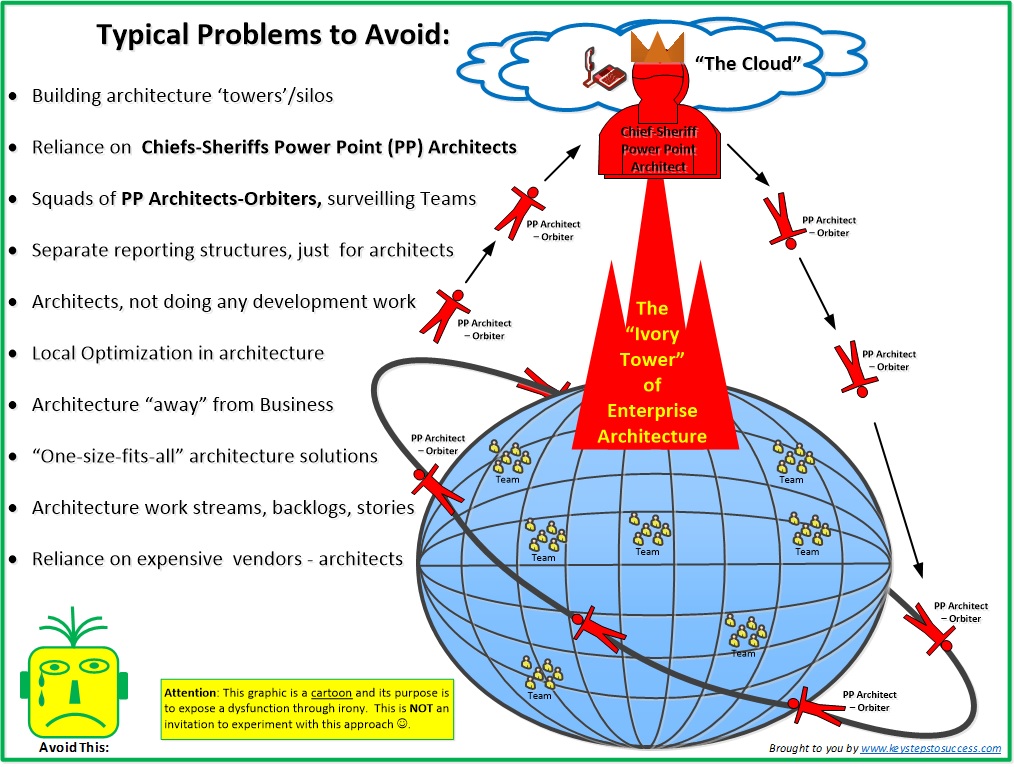 Misunderstanding roles of other people

A manager does not keep up with evolution of roles and does not understand purpose/importance of some new roles that have emerged in a workplace.  As a result, a manager tries to “map” new roles to old roles and apply the same yard-stick to measure and manage a subordinate.  His own lack of understanding could be frustrating to a manager and, therefore, make him feel defensive in discussions of roles and responsibilities of his subordinates.

Compromised self-esteem and desire to protect own Status Quo

While being a part of a larger organization, a manager might be getting a significant portion of mistreatment, in the form of command & control behavior, from his own superiors.  This is where the desire to protect his own status quo and not to look defeated in the eyes of his own peers and sub-ordinates kicks in.  There is a growing need for self-redemption and the urge the relieve a built-up psychological stress.

Note: All three examples of the root causes of Command & Control behavior above, usually result in a manager becoming passive aggressive and seeking ways to discharge negativism onto others.  Typically, “others” come in the form of a manager’s own subordinates, with the latter becoming defenseless recipients of mistreatment.

With the attitude of “I am great and you are not”, a manager perceives himself as someone who is smarter and greater than his subordinates.  The person that acquires a managerial position, that is sometimes is just a result of skillful pursuit of a new vacancy (e.g. due to reorg, force reduction) and/or experience to navigate organizational political terrain, feels the need to demonstrate his superiority to others.  To continue being perceived as a super-star and to stay in a spotlight of all events that can further multiply his glory, as well as to be able to claim someone else’s credit (delivery, innovation, invention) as his own, a manager wants to keep his subordinates “at bay”, to prevent their independent advancement and autonomy.

Individual resentment and animosity towards other people

While not very common and rightfully speculative, there are situations when outside-of-work relationships or individual perception outside of working environment, define the relationship between a manager and subordinate.  Broken friendship, unsuccessful romantic relationship, differences in personal values, norms or beliefs – all can impact professional relationship at work.  A manager, who has an upper hand, may leverage his superiority to repress a subordinate, in retaliation to work-unrelated matters.  On top of being unprofessional, this behavior could be also viewed as “unsportsmanlike conduct”.

“I am Expert” distrusting stance (distrust in competence of others)

This could be viewed as the least “harm intended” manifestation of command & control behavior.  This is more commonly seen in situations, where a manager still has sufficient hands-on expertise (e.g. technical lead) and can-do work.  Viewing himself as a “super-doer-expert”, a manager usually prefers to “shut the door” and resolve all problems on his own, instead of trusting his subordinates to collaborate and come up with shared decisions.  A manager-doer prefers to make single-handed decisions, while controlling actions and interactions of other people, in a fear that someone’s failure will be perceived as his personal failure.

Below is System Modeling diagram-example that illustrates relationships Command & Control behavior with the reasons described above and some additional system variables that impact system dynamics. 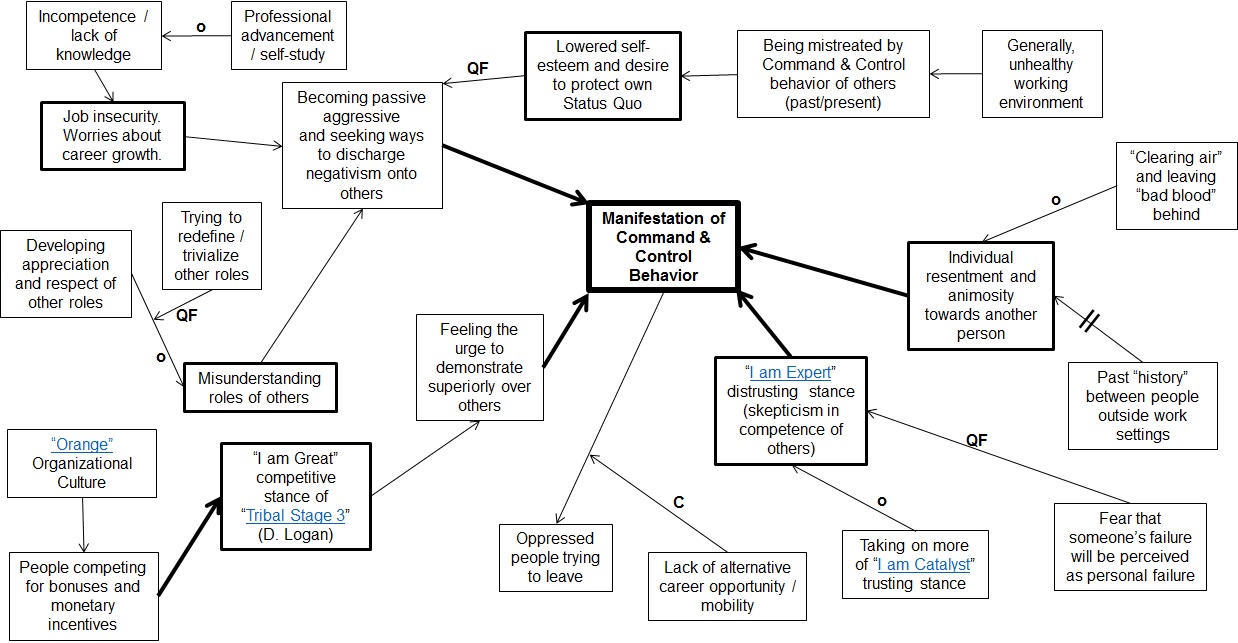 These days, almost everyone knows that organizations cannot “do” agile; they can “be” agile.  And today, this contrast is used not just by agile coaches and scrum masters.   Everyone likes building this fancy figure of speech in their daily lexicon: managers, analysts, developers.  Great!!!  Below is a snippet from Wikipedia, defining the word “agility“, using the most natural reference:  a human body. 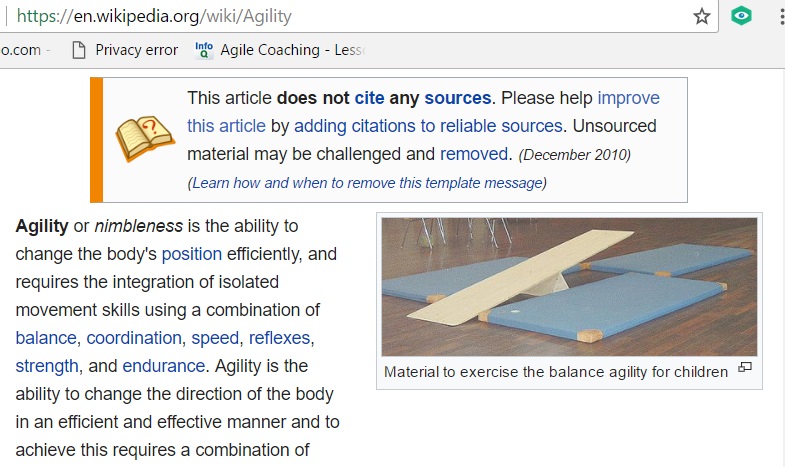 But while wrongfulness of “doing agile” is mostly admitted today, there are many examples of using other sophisticated synonyms of “doing” that hint to the fact that people are still NOT clear about what “agile” is.

As the title of this post suggests, and this is where the biggest irony comes from,  the most advanced EFL people (EFL = English First Language 😉) have been making the most noticeable language omissions, while attaching “sophisticated/fancy corporate terms-verbs” (other than “do”) to the word “agile”.

Below, is the list of verbs that are not advisable to be used in conjunction with the word “agile”:

Question: So, what can be done to protect yourself and your organization from a misuse of the above jargon?

Lets turn our attention to history….…

Back in 2001, at Snowbird, UT, where the group of seventeen entrepreneurs-product-developers have met and came up with, what is known today as ‘Agile Manifesto’, the two contending terms-to-be-used, were adaptive (suggested by Jim Highsmith, the author of Adaptive Software Development) and agile (suggested by Mike Beedle).

‘Agile’ won because of the reasons that are documented here.

So, truth be told, because the English meaning of ‘agile’ is not as intuitive as the meaning of ‘adaptive’, today, there is a huge number of fad/jargon and terminology overloading/misuse that make the original meaning of agile so diluted and abused.

As it was meant originally: Agile == Adaptive ==Flexible.   So, here is a great litmus test, if a the word “agile” is being used correctly: can it be seamlessly substituted with its synonym “flexible”, without losing a meaning?  (Ironically, being “flexible” is also an indicator of being healthy, physiologically, as well as organizationally).